The light emitting diode (LED) is popular because of its physical robustness, long lifetime, efficiency, fast switching capability, and small size. LEDs emit more lumens per watt than incandescent light bulbs, and their efficiency is unaffected by their size and shape. Yet, despite their widespread use and technology support, it’s still a challenge to precisely control an LED’s luminance.

The reasons are many and have to do with the physics of each LED wavelength, but precise luminance control can still be accomplished using the right components and design approach.

This article briefly discusses the issues associated with achieving consistent LED luminance. It then shows how a programmable, 14-bit current output digital-to-analog converter (DAC), an op amp, and a precision analog microcontroller can be used together for precision LED luminance control. Components from Analog Devices will be used by way of example.

An LED semiconductor is a light source that emits light with current flow from its anode to cathode. The semiconductor electrons recombine with electron holes and release energy in the form of photons. The required energy for electrons to cross the bandgap of the semiconductor determines the color of the LED light.

The LED’s electrical behavior operates similar to a standard diode. As with a standard diode, it is important not to overdrive the device in its forward bias mode. An overdriven diode overheats and in the worst case, will become an open circuit. When the LED is forward biased, a current flows through the device, creating light and a voltage drop from anode to cathode (Figure 1).

In Figure 1, an LED’s forward voltage varies with color (R = red; O = orange; G = green; Y = yellow; B = blue; W = white). Typically, the LED is excited with a 20 mA source to measure and specify its forward voltage value. It is tempting to drive LEDs with a voltage source, but it is hard to control a voltage source precisely, which can run the risk of overdriving the device, causing overheating and premature failure.

The three most popular LED configurations are parallel, series, or a combination of each, but in most cases it’s recommended that LEDs be driven with a voltage source and resistor to control the current magnitude (Figure 2).

Figure 2: The three LED driving configurations are parallel (A), series (B), and a combination of parallel and series (C). (Image source: Digi-Key Electronics)

Parallel strings of LEDs (A) must all have the same forward voltage specifications, and therefore, the same color LED (see Figure 1 again). Even in this configuration, the LEDs will not share current evenly due to the manufacturing tolerance in their forward voltage. For this parallel configuration, one or more of the LEDs probably becomes a current hog. The brightness of the LEDs differs because of differing forward current/luminance intensity—a factor that can render inconsistent LED displays.

In the parallel configuration (A), the RLED value depends on a predetermined supply voltage (VLED), the nominal forward voltage of the LEDs, and the number of parallel LEDs, each consuming approximately 20 mA. For example, RLED equals 10 Ω, with ten parallel white LEDs (forward voltage ~3.0 volts @ 20 mA) and VLED of 5 volts. The value of 10 Ω for RLED is calculated using Equation 1:

Where VLED = supply voltage, per Figure 2

In the series configuration (B), each LED receives the same amount of current with differing forward voltages. It is possible to have multiple colored LEDs in this series configuration. In this formation, the supply voltage is equal to the sum of each nominal LED voltage, plus the voltage drop across the resistor, RLED. For instance, if there are ten red LEDs (forward voltage ~1.9 volts) in this series with 20 mA through a 330 Ω resistor, the system voltage supply (VLED) is ~25.6 volts. In this configuration a faulty or open LED causes the entire string to fail.

The LED combination of parallel and series (C) provides the best of both worlds. In this configuration, there are fewer LEDs in the series string. This reduces the value of VLED. Also, there are fewer LEDs in parallel which reduces the likelihood of current hogs. As an added benefit, this configuration means a programmable current output DAC can be used as an economical excitation source, in lieu of the traditional static voltage source.

In Figure 2, the LED driving mechanism for the parallel (A), series (B), and combination series/parallel (C) configurations has a series resistor, RLED, and a voltage source, VLED. In these three configurations, the lowering of the forward current—meaning a reduction in VLED or an increase in RLED—will dim the LEDs. A voltage output DAC can provide the programmable voltages for VLED; however, the required high currents may present a problem. A voltage output DAC is often not able to supply the high current required for the LEDs, so it is often the case that a power amp (op amp) is required.

To avoid the problems and complexity associated with voltage output DACs and potentiometers, the most elegant design approach is to instead use a current output DAC.

A current output DAC offers programmable current to the LED. The critical specifications for this DAC are the capability to provide 20 mA per LED and a high degree of resolution of that current. The current programmability can be used to tune in the desired luminance with the assistance of a transimpedance amplifier (TIA) (Figure 3).

In Figure 3, the two LEDs seek their forward voltage level with their 20 mA excitation current. To finish the LED system in Figure 3, a photodiode (PD) on the front end of a TIA senses the LED luminance. For this system, the amplifier requirements are low input bias currents to avoid competition with the photodiode current (IPD) and low input offset voltage to keep the drop across the PD to a minimum.

The implementation of a programmable luminance LED controller system requires a precision analog microcontroller, such as the ADuCM320BBCZ from Analog Devices, as well as an AD5770RBCBZ-RL7 current output DAC, and an ADA4625-1ARDZ-R7 op amp, both also from Analog Devices.

The programmable DAC provides accurate output currents for the LEDs, while the op amp, configured as a TIA, receives the analog LED luminance magnitude through the photodiode. The TIA then sends an output voltage (VOUT) to the microcontroller’s ADC input (Figure 4).

The magnitude of the current is under system control with a TIA in the feedback loop. The ADA4625-1 op-amp has a 15 picoamp (pA) input bias current (per the datasheet) and a 15 microvolt (µV) offset voltage, providing a wide TIA dynamic range. This dynamic range provides a high degree of luminance flexibility to change  the LED from a maximum intensity down to a completely dark state.

The system designer determines the variation and range of the LED’s luminance. For instance, a 14-bit DAC provides 214 or 16,384 divisions. For this DAC with a full-scale output of 100 mA, the least significant bit (LSB) size is 6.1 microamps (µA), per the equation:

IDACxLSB = the current LSB size of the x channel

With a supply voltage of 5.0 volts, the six-channel AD5770R drives the two series LEDs with a nominal current of 20 mA. In this circuit, the LED voltages seek their own forward voltage level.

In the circuit shown in Figure 4, the maximum output current of each output port (IDAC0-IDAC5) can be adjusted down to 50% of the nominal value. This flexibility allows the designer to better match the LED excitation currents. This action also lessens the LSB current magnitude.

To further improve the system accuracy, the designer can replace the DAC’s on-chip reference generator with an external reference or an added precision resistor.

Finally, the AD5770R has a multiplexed on-chip diagnostic function that allows the designer to monitor output compliance voltages, output currents, and the internal die temperature, all with an external ADC.

The AD5770R current output DAC drives the strings of two LEDs with a low-noise controlled, programmable current source with an IDAC2 and IDAC5 output noise spectral density of 19 nA/√Hz and 6 nA/√Hz, respectively.

With their physical robustness, long lifetime, low energy consumption, fast switching, and small size, LEDs have many advantages over other lighting technologies. However, despite the extensive use of LEDs, it is still challenging to precisely and effectively control their output luminance. 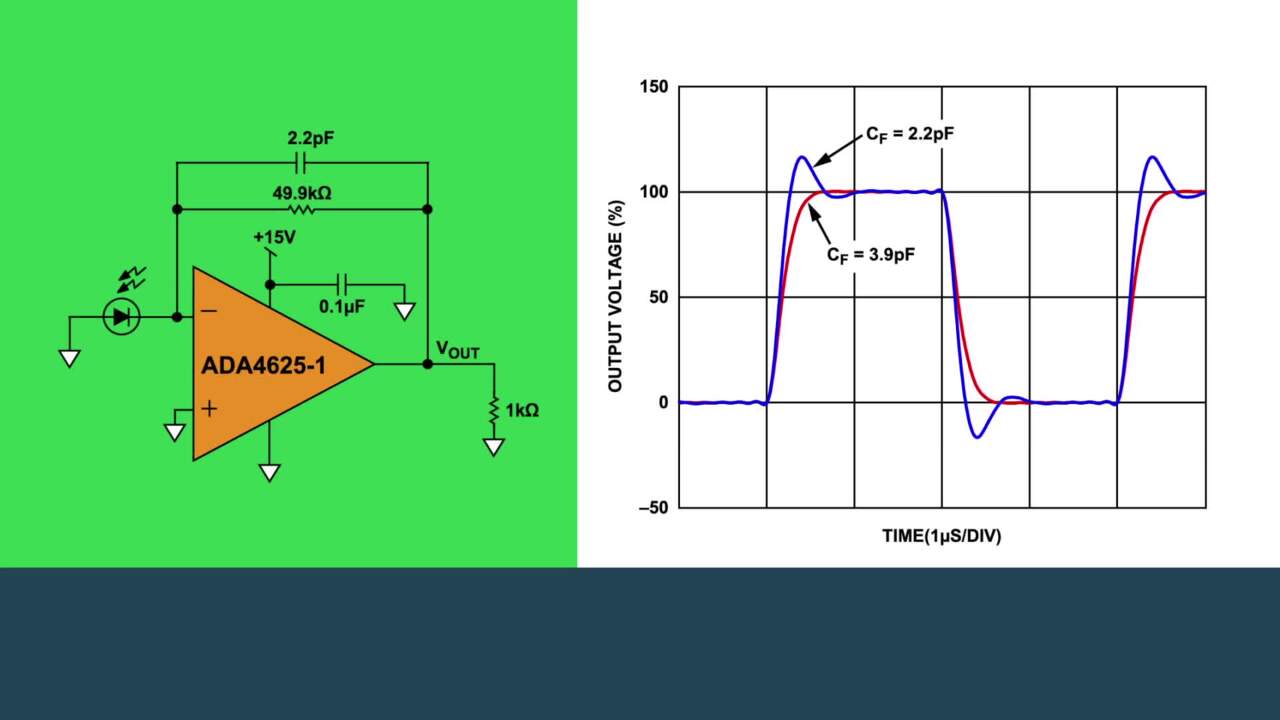